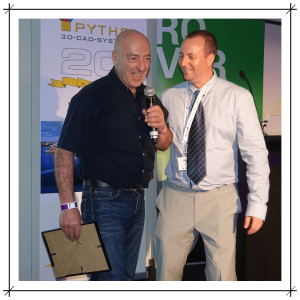 Tony Galati of Emstar Kitchens in Thomastown, Victoria, was recognised for being an Australian ‘forerunner’ of PYTHA at the recent Pytha Partners Convention held in Sydney in October.

Tony was acknowledged for his twenty-year dedication to the software during a special Gala event in the Sunset Room of Sydney’s iconic Luna Park. When he accepted his certificate (and a very nice bottle of plonk!), Tony was quick to grab the microphone and entertain the audience with his PYTHA story.

As an enthusiastic young cabinetmaker in the 1990s, Tony was beginning to get the idea that technology would change his trade. When he discovered PYTHA software, Tony could see great potential in presenting kitchen and cabinet designs to clients in 3D. The investment was huge at the time, but this savvy business owner took the plunge and borrowed money to add PYTHA 3D CAD to his toolbelt.

When the contract was done and dusted and his license was due to arrive, Tony shocked the PYTHA distributor when he asked what kind of computer he’d need to operate the software. Not only was he a software novice; he admitted he’d never owned a computer!

Tony spent the first few weeks trying to get his head around navigating his first PC and learning how to use a complex 3D software package. The learning curve was steep, but in about three months he was doing renders for clients, and has never looked back!

Pytha Partners Australia congratulate Tony on his vision and persistence, and look forward to the next decade with this PYTHA Pro.

Keen to see how PYTHA can make a difference to your manufacturing practice? Contact us today.